Music has always played an important role at Trinity Lutheran and we are lucky to partner with many outstanding musicians and musical groups.

Our Choir is comprised of music professionals who have sung with the Metropolitan Opera Company, Richmond County Choral Society and the Wagner College Choir as well as folks who just love to sing. Many of our members also teach Music and Voice at Wagner College.
Quincy Dover, a well known organist, is Trinity’s Director of Music. Quincy is renowned for his ways of engaging the congreation into the music by playing the organ in ways that are not usually done. 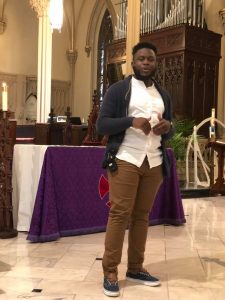 Quincy was raised in the Episcopal Church and found his interest in the organ from an early age being brought to church every Sunday by his grandfather. He eventually started to pick up things on his own and playing hymns just by listening to them. At age 9, he started organ lessons but would often drift off from them and teach himself. He has learned from musicians such as Dr. Albert Miller, Kurt Daisley, Gregory Eaton, and Dr. Wayne Barr at Tuskegee University.

Although Quincy gives credit to the knowledgeable organists he’s learned with over the years, he’s most proud of his self-teaching. At 16, Quincy was playing in churches all over the tri-state area substituting for organists who were taking time off. He has also been the organist for several large services attended by Bishops, celebrities, special dignitaries, and mayors.

(baritone) is our Cantor and is in demand as a singer (solo recital, concert and opera), lecturer, teacher of master classes and business of singing seminars. Please click on the link to hear Anthony’s beautiful voice.

Charlie Romo is our Artist in Residence

Charlie Romo is a native New Yorker and grew up in a community and family with strong character which has reinforced in him a style that has served him on stage.  He studied music at Wagner College and has performed on the same stage and in shows with Usher, Chita Rivera, and Ben Vereen at venues like Lincoln Center, the iconic Friars Club, State Theatre, Green Room 42, Feinstein’s at Vitello’s, and the internationally acclaimed Birdland Jazz Club in New York City.

Charlie is in his 20s and yet totally confident, comfortable and at home on both small and very large stages.  His captivating body language, radiant smile, personal warmth and pitch-perfect technical mastery reveals his fresh, new, exciting talent that profoundly engages, energizes and mesmerizes his audience at every show.  Charlie has an avid passion for, and a unique interpretation of recognizable renditions of popular standards of jazz and the Great American Songbook.  He revives this music and style of a previous era in a dynamic and refreshing way.  With intense excitement and enthusiasm, Charlie has a way of turning back the clock, without imitation, and like a kindred spirit, he embodies and channels the soul and sound of cherished legends—the likes of Bobby Darin, Frank Sinatra, Tony Bennett, Elvis Presley, and Dean Martin.  Typically, his audiences respond in a wildly enthusiastic fashion as he brings back the romance, flair, subtlety, and the longing of the music that played through a smoky, satiny generation of courtship, club-going and dancing. Charlie is always joined by world-class musicians who have worked with dozens of top artists, including Frank Sinatra, Eartha Kitt, Judy Collins, Barbra Streisand, and Tony Bennett. Bobby Darin at the world-famous Copacabana in 1960 and Charlie Romo have both been accompanied by Ronnie Zito on drums.

Charlie was the recipient of Broadway World’s 2016 Best Debut Artist Award,  was also named 2017 NYC Manhattan Association of Cabarets & Clubs Best Male Debut Artist and is the youngest member ever to be inducted into the legendary Friars Club in New York City.