Originally founded in 1856 as Der Deutsche Evangelische Lutherische Gemeinde zu Stapleton, Trinity began as an expression of the faith of German immigrants.  Over the 155 plus years of its existence, it has evolved into a multi-cultural congregation that reflects the diversity of the North Shore of Staten Island.

The first Lutheran church on Staten Island was the German Evangelical Lutheran Congregation of St. John, now known as St. John’s Lutheran Church.  Due to growing pains, an additional  congregation in Stapleton was formed.  The first service of what would become Trinity, was held on October 26, 1856, probably presided over by the Rev. J.C.F. Hennicke. Within a few months, at a congregational meeting , the name of the new  church was declared to be Der Deutsche Evangelische Lutherische Gemeinde zu Stapleton.

During his tenure, the congregation continued to worship in rented space for a few years until the decision was made to purchase a building on Richmond Turnpike. It was rehabilitated and served as the primary church location until 1913. Simultaneously, the Trustees purchased four contiguous lots on the northeast corner of Beach and. St. Paul’s Avenues where the current Gothic structure was built and occupied by the congregation in 1913. 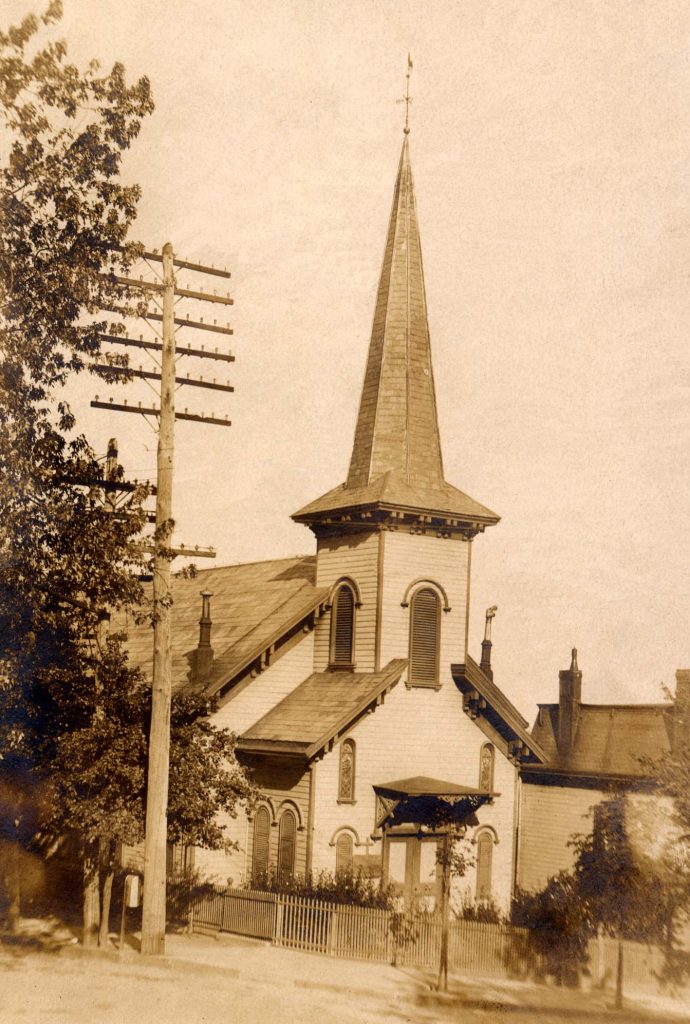 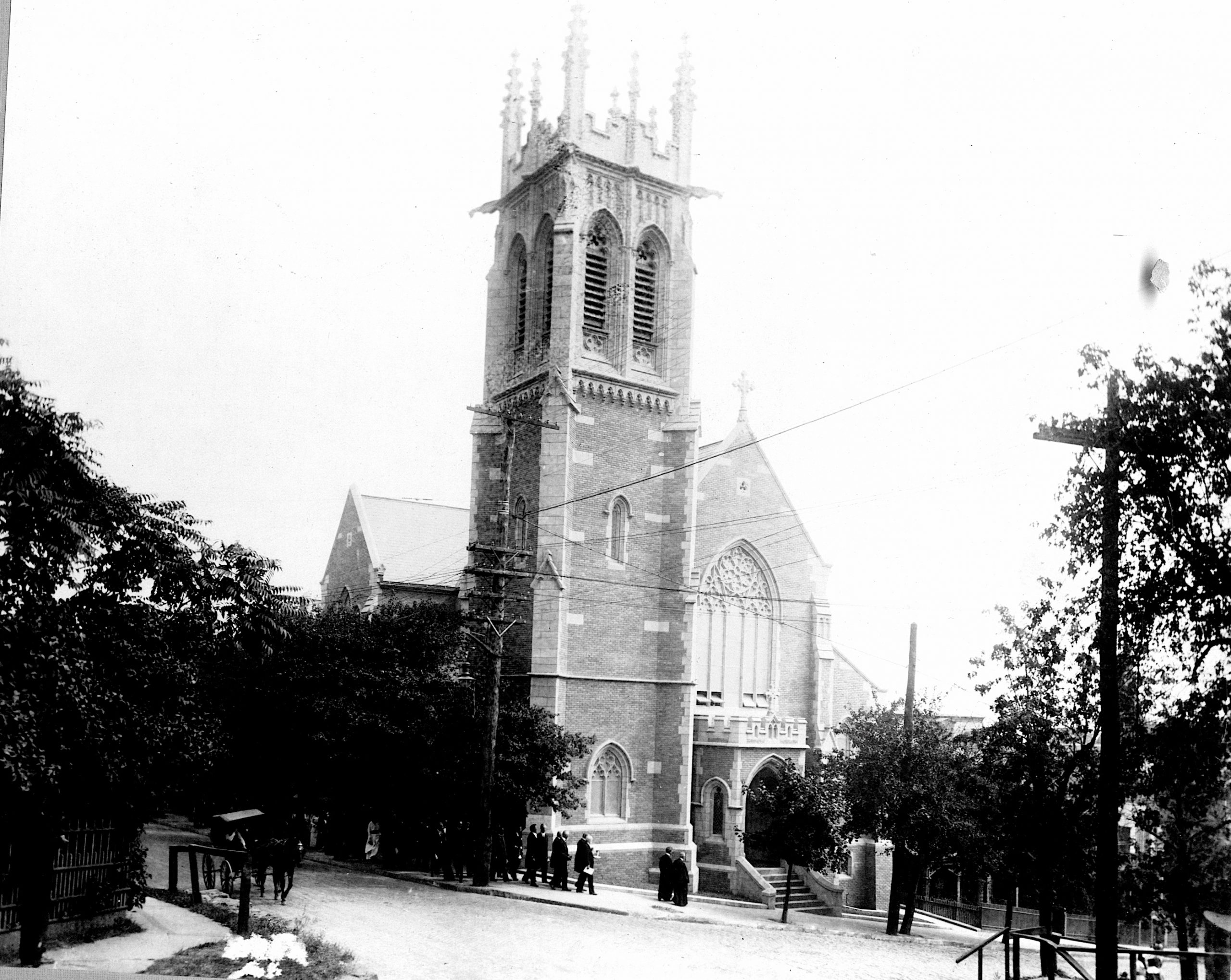 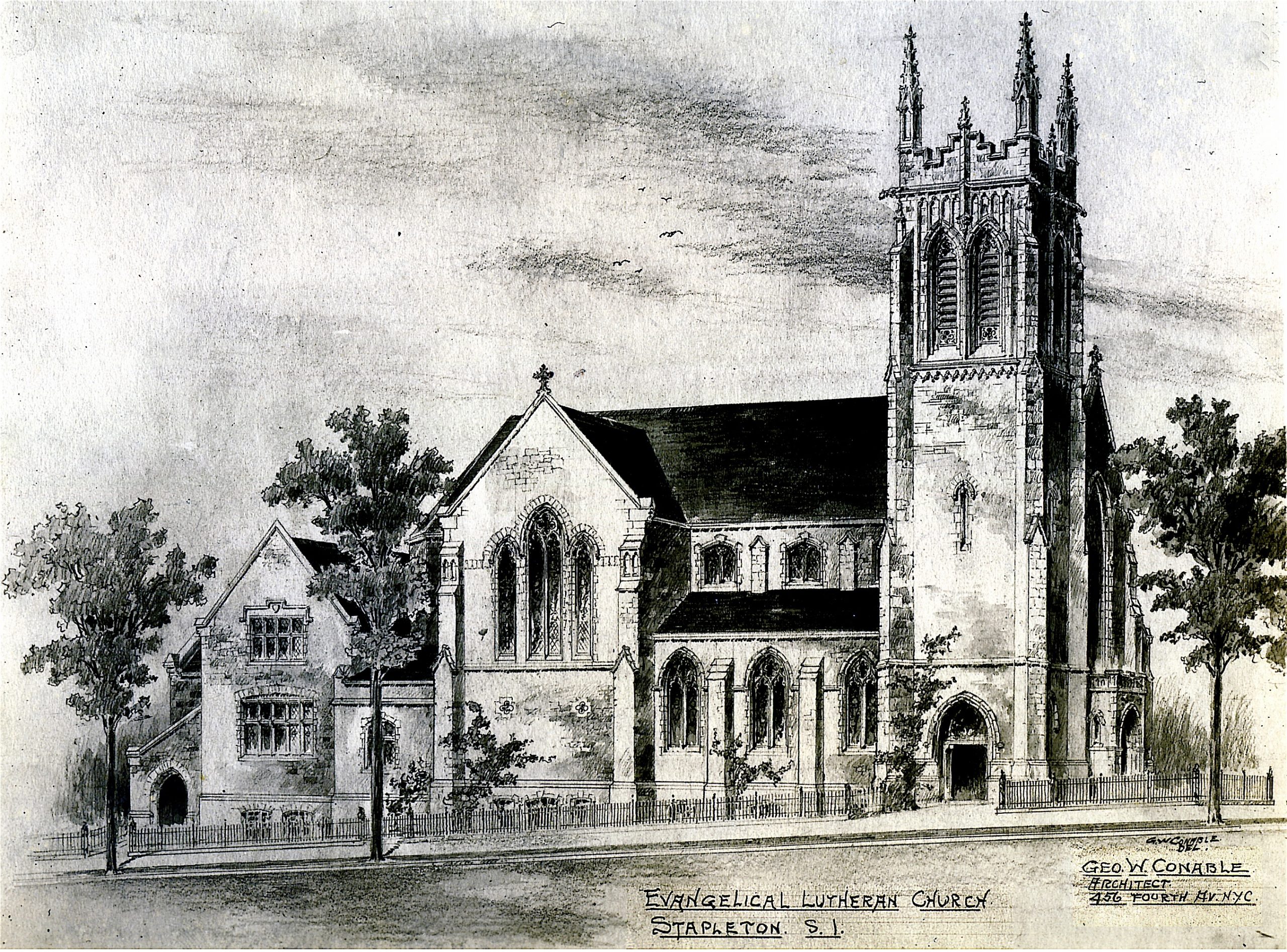 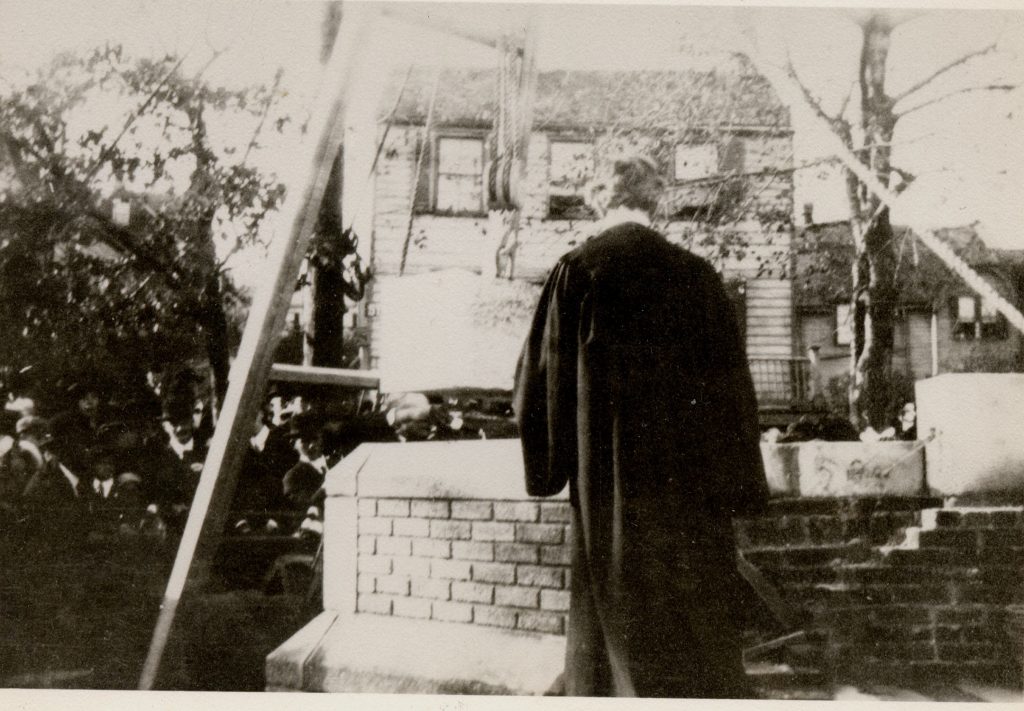 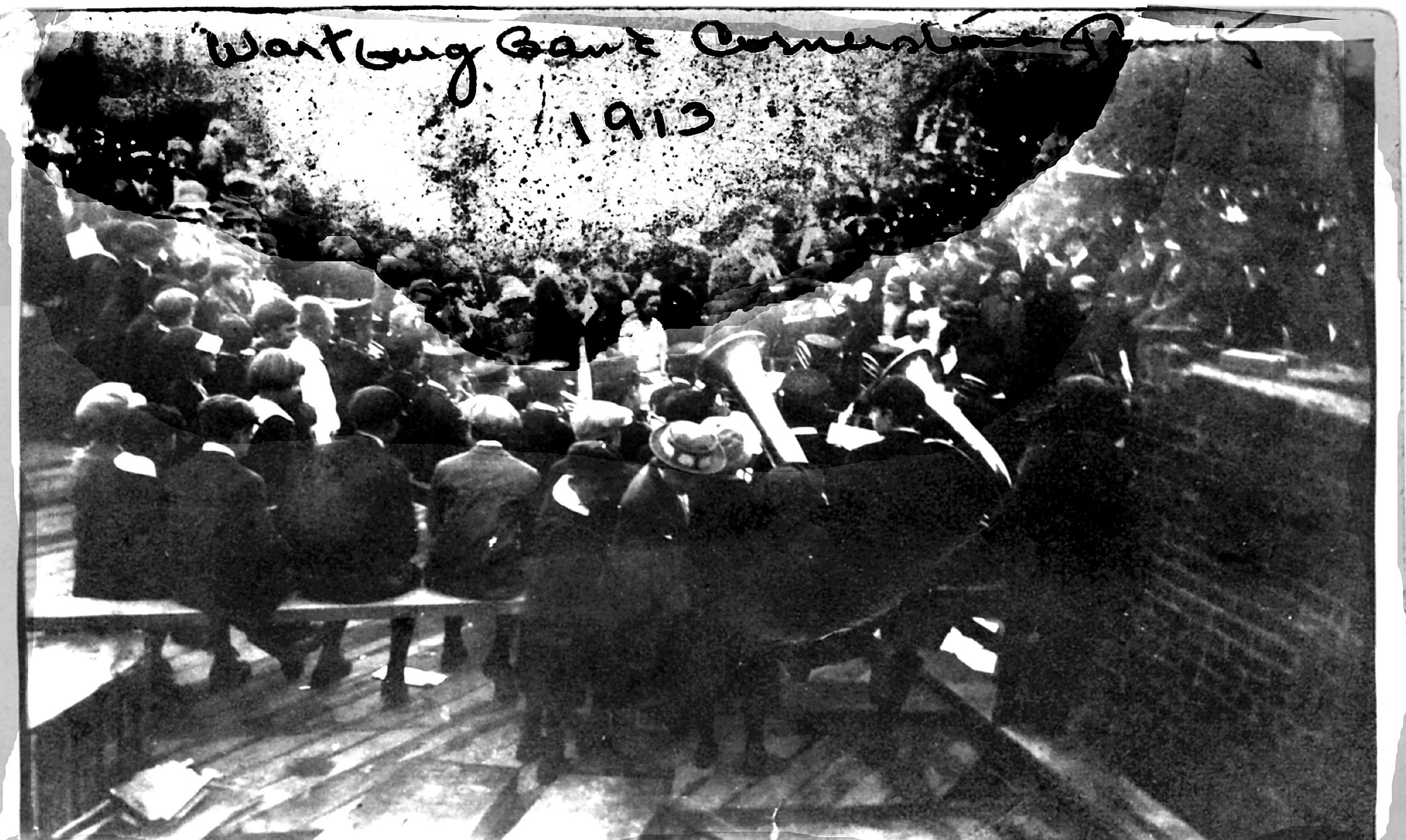 Wurtsburg Band for the laying of the Cornerstone 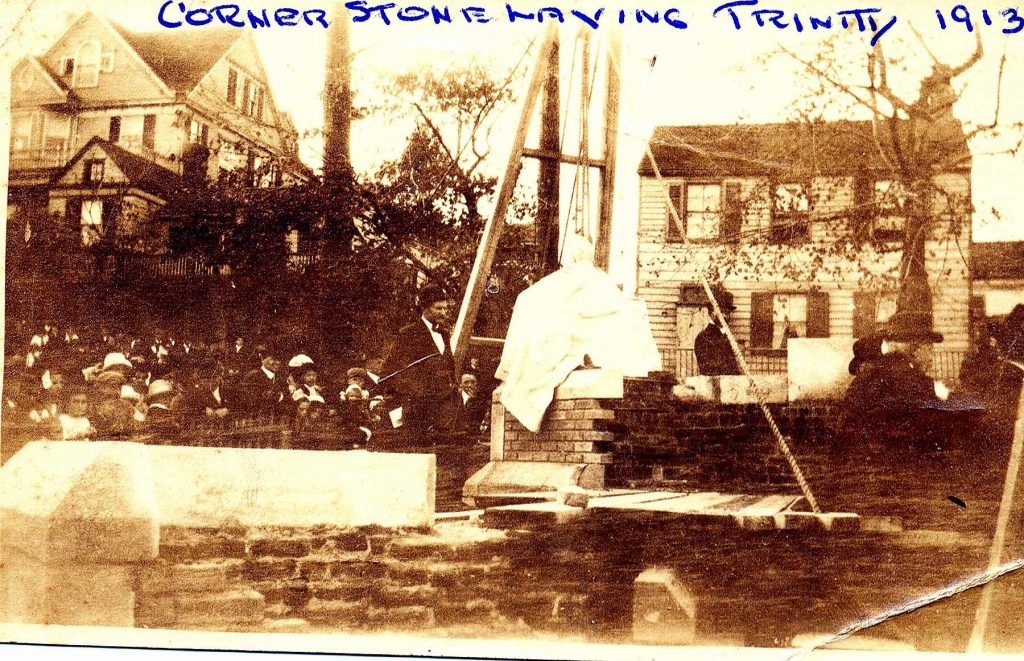 Between the years of 1870 through 1907 a variety of pastors led the congregation until the congregation called the Rev. Frederic Sutter as their pastor.  He was born in Stambach, Germany on February 26, 1875 and moved to the United States while still a child.  He graduated from Wagner Memorial College (then located in Rochester, NY) in 1894, and from the Lutheran Theological Seminary in Philadelphia in 1897. He was ordained by the New York Ministerium in 1897.

Pastor Sutter almost immediately began to make changes that would, in time, enable this German congregation to transcend its German roots and enter the 21st Century as a vital, multicultural institution.  Slowly at first, he began to institute English language services one Sunday evening per month followed by English language Sunday school and Confirmation classes.

Pastor Sutter also turned his attention to bringing Wagner Memorial College to Staten Island from Rochester, NY.  Pastor Sutter’s relationship with Wagner College went back many years.  Wagner was founded in 1883 in Rochester, New York, as a “Proseminary”, with the purpose of educating young men to serve German-speaking Lutheran churches.  Pastor Sutter was instrumental in convincing the Trustees of Wagner to move the college to Staten Island, and convincing the New York Ministerium (now the Metropolitan New York Synod of the Evangelical Lutheran Church in America) to purchase the Cunard Estate on top of Grymes Hill.  The property was purchased and Wagner College moved to Staten Island in 1918.

Pastor Sutter served on the board his entire life, and guided the affairs and growth of the college in both good and difficult times.  It became a co-educational institution in 1933, and enrollment increased from 300 in 1935 to over 1500 by the 1950’s.  Today, Wagner is one of the finest educational institutions in the country, with over 1,900 undergraduates and 300 graduate students from 39 different states and 13 countries.  Wagner is ranked by US News and World Report in the “Top Tier” of Northern Universities, continuing its tradition of academic excellence.

Pastor Sutter’s son Carl was ordained in 1933. Pastor Carl’s crowning achievement was the foundation of Trinity Lutheran School which opened in 1960 and until 2010 served as  a beacon for top notch education.

After Pastor Carl retired in 1979,  the Congregation called the Rev. Thomas F. Mugavero.  “Pastor Tom” took over the reins of Trinity in 1979, and served the congregation until the year 2000.  During those years, the major mission efforts were the school, the soup kitchen, and the music program, which saw the creation of a Concert Choir.

Under the leadership of Rev. Richard F. Michael, who was called as Pastor in 2001, Trinity entered the 21st century with undiminished spirit and energy, carrying out its mission as a place “Where God’s Grace is Shared.”  Under his leadership, our Feeding Ministry was expanded,  our connection to the Staten Island Council of Churches was strengthened (Pastor Michael served as their president) and our relationship with Wagner College continued as he served as Chaplin.

After Pastor Michael retired, the talented and gifted Rev. Jennifer Hanus Richards assumed the reins and lead us in  a Shared Ministry with Our Saviour Lutheran Church.

Pastor Martin Malzhan became our new shepherd in 2016 and brings with him an extensive background in congregational and campus ministries. Click on this link for his biography